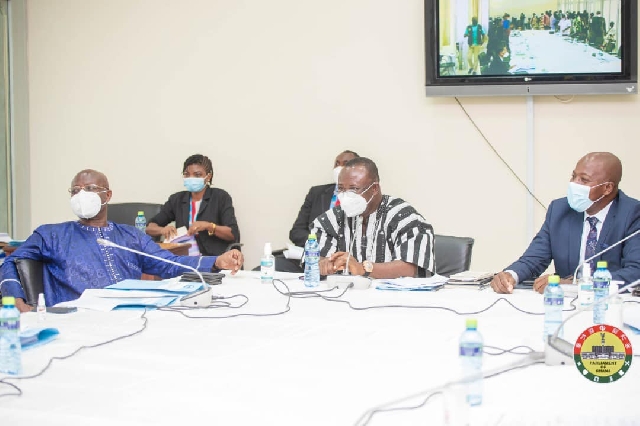 The Appointments Committee of Parliament, on Tuesday, 8 June 2021, continued with the vetting of deputy ministerial nominees.

If he goes through the vetting successfully, the 46-year-old Member of Parliament for Asunafo North will join substantive Minister Mustapha Ussif at the Ministry responsible for youth and sporting activities in the country.

The Deputy Youth and Sports Minister-Designate told the Committee that the Ministry would not allow the country's sporting facilities to deteriorate, as it has put in place measures to make them modern sporting edifices in a bid to improve sporting infrastructure.

On calls for the decoupling the Youth portfolio from Sports to allow it to prioritise youth development issues and effectively play its oversight role in ensuring the development of the capacity of the youth and to coordinate efforts in youth development, he said it is not in the best interest since majority of stakeholders in sports are the youth.

Also, the Deputy Minister-designate of Employment and Labour Relations, Mr Bright Wireko-Brobbey, who appeared next, informed the Committee about how he will assist the sector Minister for effective work.

The Hemang Lower Denkyira MP, who has been re-nominated to occupy his previous office, is a development planner and holds a post-graduate Diploma in Regional Development Planning and Management from Dortmund University, Germany, as well as a Bachelor of Arts Degree in Social Science from the Kwame Nkrumah University of Science and Technology.

He said the Ministry’s performance in accelerated employment generation for national development and measures adopted for the resolution of disputes resulted in the promotion of harmonious industrial and labour relations as well as workplace safety being witnessed at the labour front.

The nominee noted that though most recent jobs have to do with digitisation, the Ministry will ensure that fair opportunities would be given to the youth of the country who have lost confidence in the system’s unfair distribution of employment opportunities.

He promised to have interactions with the necessary stakeholders, if approved, to ensure that jobs given are based on merit and adopt measures to ensure relatives are not allowed to work in the same place just as is done in the United States, so as to provide the opportunity for others as well.

Mr Brobbey said about GHS 41 million has been transferred for the payment of tier-3 pensions but declined to state emphatically if the government has outstanding debts and also revealed that the Ministry has no representation on the SSNIT Board.

The Deputy Minister-designate of Defence Kofi Amankwah-Manu later took his turn to brief the Committee on the steps he would take to ensure the second administration of President Akufo-Addo is successful.

The Atwima Kwanwoma Member of Parliament holds a Graduate Certificate in Intelligence Analysis, LLB and BSc. Accounting and Finance and is former Presidential Staff Seconded to National Security.

The nominee told the Committee that steps are already being taken to ensure the cessation of assault of Ghanaians by military personnel so as to create a conducive military-civilian relationship.

He regretted the assault against Citi FM journalist, Caleb Kudah, and the raid of a casino in Asenkoragua by National Security operatives and opined that National Security is a human institution that can engage in some uncalled for acts, however, he said their actions should be condemned and would ensure such happenings do not occur in the near future.

On the Joy News documentary on galamsey where some military men were assisting the illegal act, he gave the assurance that the perpetrators will be sanctioned and added that soldiers should not be seen parading around with guns in town and assured the Committee to ensure that given the nod, the discipline known to be embodied by the military will be maintained.

He disclosed that the Defence Minister Dominic Nitiwul is already addressing the matter of peacekeeping issues to ensure that entitlements of these officers are paid and gave the assurance that challenges faced by civilian employees will be addressed.

In reference to the government’s burning of excavators to end illegal mining, he said the President's advice that affected parties should seek legal redress should be welcomed.

Thirty-one-year-old Mavis Nkansah Boadu, who entered Parliament in 2016 at a young age of 26, the 2nd youngest parliamentarian to join the 7th Parliament and heading to the Ministry of Roads and Highways, was the last nominee to appear before the committee.

The Member of Parliament for Afigya Sekyere East admitted that though contracts awarded are paid through the Road Fund or grants received, there are challenges associated with road funding resulting in delay in payment to some contractors.

She, however, assured the Committee that the steps the Minister has put in place will address and resolve these issues.

She was optimistic she will execute her duties without fear despite being the first female to head to the Ministry and shared the view that Ghana has one of the lowest road tolls and thereby concurred to a member of the Committee’s suggestion to prevail on the sector Minister to back Road Funds with Bonds.