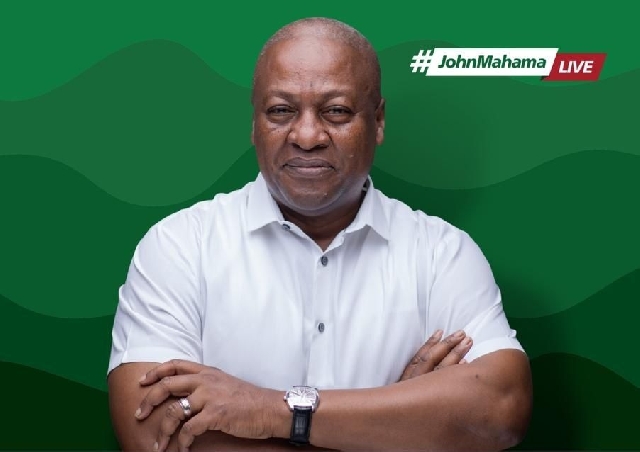 The Coalition of Aggrieved Customers of Menzgold have urged their members to vote for the flagbearer of the main opposition National Democratic Congress (NDC) John Dramani Mahama in the December 7 elections.

This comes after government’s failure to pay their locked-up funds while Mr Mahama has promised to vigorously pursue and retrieve locked up investments with the defunct gold dealership firm, Menzgold, back to the customers if elected President again.

The coalition noted at a press conference over the weekend that “we have carried out series of public protests. Government has totally neglected our call and instead have its ministers and communicators call us names such as greedy people, and other unprintable ones that it’s not worth repeating them.”

To this end, the aggrieved Menzgold customers said: “We want to use this opportunity to thank Former President Mahama for his compassion and commitment to assist us retrieve our investment should we give him the power on 7th December 2020 and this we pledge our support. We, therefore, urge every customer to mobilize at least 10 additional voters to vote for John Mahama on 7th December 2020 to make this a reality.”

Read their full statement at the press conference below:

Failure of Government to retrieve Locked up investment in Menzgold

Ladies and gentlemen of the press we thank you so much for attending our invitation.

Some two years ago, customers of Menzgold woke up to the reality of our investment locked up as a result of government directive through Security and Exchange Commission for a shutdown of Menzgold Company Ghana Limited. Several appeals to government under Act 929 section 123 to assist customers retrieve our hard-earned investment have fallen on deaf ears. We have written petitions upon petitions.  We have carried out series of public protests. Government has totally neglected our call and instead have its ministers and communicators call us names such as greedy people, and other unprintable ones that it’s not worth repeating them.

We want to use this opportunity to thank Former President Mahama for his compassion and commitment to assist us retrieve our investment should we give him the power on 7th December 2020 and this we pledge our support. We, therefore, urge every customer to mobilize at least 10 additional voters to vote for John Mahama on 7th December 2020 to make this a reality.

Perception on why Government has failed to prosecute Nam1

Our painstaking investigation on why government has failed since 2018 to bring Nam 1 to real justice and assist us in retrieving our locked up investment bring us to two main findings:

1. That Menzgold was a scheme carefully established by some people linked to the Akuffo Addo government whilst in opposition and it was mainly to achieve two objectives:

A. to raise money for political activities

2. To weaken the banking sector with its juicy returns on investment which lure many of the customers to pull their investments from the mainstream banking institutions to come and invest.

We again note that apart from His Excellency the President and his vice, the next person with armed state security is Mr Nana Appiah Mensah, CEO of Menzgold, this, thus, raises our suspicion that menzgold is a creation of some state officials. We also note that many of the Dubai stories as we were told by government officials were fake and make-belief stories, the then CID and its boss lied to us.

The Deputy Attorney General, Mr Joseph Kpemka's supposed visit to Dubai in 2019 were all fake and we challenge Mr Kpemka to publish the name of the prison cell in which he met Nam1. It will be recalled that after the Deputy AG visit to Dubai, they gave us a 2nd February 2019 appearance in court date which turned out to be fake. The CID later admitted this as error

Again, government deliberate failure to confiscate the assets and bank accounts of Nam1 before and immediately after the shutdown of Menzgold also indicates that this government is complicit in the Menzgold issues and thus they were the real owners of the Menzgold scam. How on earth a government worth its sort will collapse a company you claim was operating illegally but failed to freeze its assets knowing very well that it has collected huge sums of money from your citizens? Even after the Court order to freeze the assets, as customers and good citizens we helped the CID and EOCO to trace many of the assets of Menzgold, for two years what has happened to those assets whilst over 80 lives wear away? Where are the 400kg of gold EOCO seized?

The reckless abandoned with which Security and Exchange Commission went about with closure of Menzgold without thinking about the innocent customers even in the face of ACT 929 section 123 further suggest government was insensitive to our plight.

The tragedy of this government is not only the pain it has caused us but also its tacit approval to watch Nam1 breeding many other scams and perpetuating it on only Menzgold customers whilst government look on unconcerned. Some of Nam 1 scams in recent times are Payboy, ivex Minerals,  Menzgold global, zallywood land for sale, Menzgold Prado, his latest scam is that he is inviting customers to book appointment with him and for every appointment customers are to pay GHC5000 before they see, this one too government is watching him doing it.

All such things cannot happen if Nam1 is not a powerful person in the current government’s administration?

Ladies and gentlemen of the media, as part of our engagement with Menzgold certain state officials and names were given to us as people who are holding on to Menzgold money. These officials are

As customers we have knocked every door of the state including the President of the Republic and from the recent utterances by the Vice President Dr Mahamud Bawumia labelling us as having invested in a 419 unregistered company even though his party was a huge beneficiary of Menzgold spoils, we have no option than to ask our members and family members and friends to vote for Mr John Mahama on 7th December since he has demonstrated compassion and outlined the road map of retrieving our investment for us.

We there have huge trust in Former President John Mahama since he has the track record of solving such difficult problems when he is in government.

The choice we have in this year’s election is very simple involving two options.  We have one which collapsed our investment and called us greedy, foolish and stupid and having invested in unlicensed 419 company and the one who did not and has promised to investigate, retrieve and pay.

We have a choice to make between the one who collapsed our investment which has led to the dead of over 80 innocent customers, whilst many are bedridden and the one who did not but has given us hope.

We, therefore, urge our customers to vote for President John Mahama since he has promised payment and outlined payment strategy for which customers have confidence.