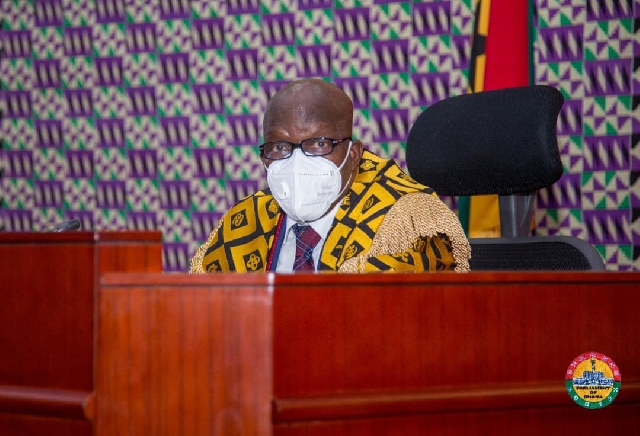 The Speaker of Parliament, Mr Alban Bagbin, has directed the Minister of Roads and Highways, Mr Kwasi Amoako-Atta, to immediately reverse his order that there be an immediate cessation of the collection of road tolls as of Thursday, 18 November 2021.

Mr Bagbin gave the order in parliament on Thursday, 18 November 2021 after Minority Leader Haruna Iddrisu raised concerns about the minister’s statement infracted the rules and authority of the legislature.

“Clearly”, he said, “what happened on the 17th November 2021 was the minister of finance representing His Excellency the President and presenting to this house, a budget and financial proposals for the year 2022; that is effective 1 January 2022 to 31 December 2022”.

“That was what the [finance] minister sought to do and the minister, straightaway, in the first paragraph of his statement, introduction; said: ‘Rt Hon Speaker, Hon members of parliament, on the authority of His Excellency the President Nana Addo Dankwa Akufo-Addo, I beg to move that this house approves the financial policy of the government of Ghana for year ended 31 December 2022”.

“So, it’s a proposal they are presenting to us for us to approve to take effect from the 1st of January 2022 to ending 31st December 2022”, Mr Bagbin noted.

He continued: “And, so, until this budget is approved, all that is contained in the budget are proposals”.

“We have the authority to approve”, he insisted.

“They [executive] have been given the authority, pursuant to article 179, to prepare and lay before the house and we have to approve that. So, those are policy proposals that the minister presented to the house”, he said.

“Until they are approved, nobody; and I mean nobody has the authority to start implementing something that doesn’t exist”, he insisted.

“But does that amount to a disrespect of the house? That is where I may differ”.

The roads minister, Mr Bagbin surmised, “might have misunderstood or misapplied the law and, so, it’s for us to draw his attention and tell him that: ‘You have no such authority'”.

“It is very clear that what the minister sought to do, he has no such authority to do that. It’s not a matter of operationalisation of the law. There is no such law for him to operationalise. The law we have now has proposed the fees that they have been collecting, so, it is being implemented. It’s not like something you are going to now start”, he said.

He added: “If they [executive] have any problem with the implementation of the law, then they have to come back to this house because we don’t just sit down and pass the laws. We consult the people who elected us to represent them here. That is why committees invite memoranda and invite people to appear before the committee”.

“And, so, the executive cannot just, on their own, suspend the implementation of the law without coming back to the house. That is not democracy. That will be a one-man rule. And, so, I want to clearly direct that what the minister has released is an empty boast; it has no effect”, the Speaker added.

“So, I think that it’s quite right to direct the minister – in fact, a senior member of this house he’s not just a junior member – who is used to all this and I think that he might have reacted wrongly and, therefore, I call on him to honourably withdraw that directive; failure to do so will be a serious breach of the directive of the Speaker and that could amount to contempt of parliament”, he warned.