Your voice muted on national affairs – Mahama to House of Chiefs 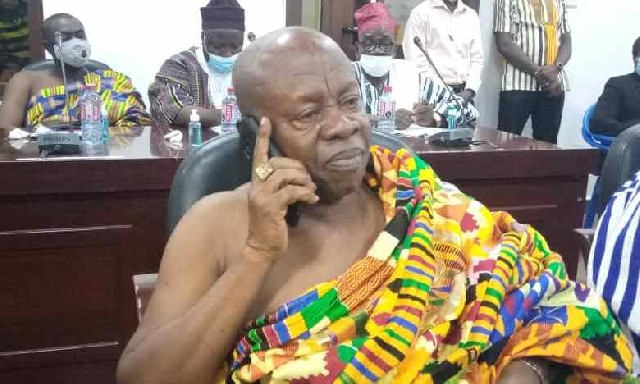 Former President John Dramani Mahama has chastised the National House of Chiefs saying they have remained mute on national affairs despite the hardships in the country.

According to Mr Mahama, the House of Chiefs under the presidency of Togbe Afede XIV, was bold and frank but has become silent after the Agbogbomefia of the Asogli State ceased to be leader of the house.

He said the chiefs are closer to the grassroot and know the suffering of people under this government but they have chosen to be silent.

Addressing the Asogli traditional council as part of his ‘Thank You’ tour of the Volta region, Mr Mahama said “Togbe [Afede XIV], we admired your frankness and boldness when you were chairman of the House of Chiefs but since you left, the voice of that house is muted and that is the truth.

“The voice of that house on national affairs is muted. There are lots of things that is going on in this country and the House of Chiefs is silent.”

Mr Mahama noted that “times are hard and you the chiefs are the ones at the grassroot with the people. You know the hardship the people are going through and at a time like this if the house had a bold leader like you, I’m sure you would have drawn the government’s attention to what is going on in the country but unfortunately, that is not the case.”

Touching on the 2020 elections, the immediate past flagbearer of the NDC said “a lot of things went wrong in the last election, I remember we came to you and we complained to the House of Chiefs and you were proactive, you called the electoral commission and put the things we said before them and they went and they were supposed to come back to you with answers because they had no answers and so when you called them again they didn’t come.

“And they went ahead and held the elections that were held. Unfortunately, eight of our compatriots were killed during that election. Many things went wrong, excess ballot papers were printed, people took ballot papers in their pockets and went to stuff ballot boxes but Togbe we went along because we wanted peace of the nation.”

Mr Mahama further stated that the NDC still want the peace of the nation “but for 2024, we want to serve notice that we will do anything to make sure that the 2024 election will be transparent, fair and clean.”