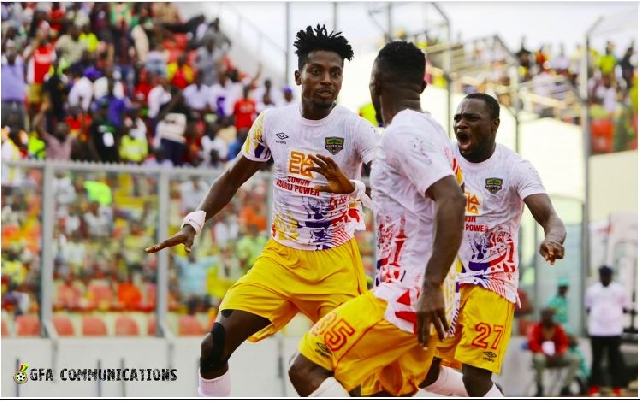 Caleb Amankwah scored late to give Hearts of Oak a point against Asante Kotoko in the first Super Clash of the season on Sunday at the Baba Yara Stadium.

Kotoko thought they had won all three points minutes to the end, but Amankwah stunned them with a goal in the 88th minute to save the day for the Phobians, who clearly were second best on the afternoon in Kumasi.

Kotoko will be disappointed, but they must blame themselves for not winning because they were wasteful, squandering many great opportunities, with Steven Mukwala being the worst offender.

In the first half, Kotoko were the superior team. They dominated and should have led at the break, but their attackers were wasteful.

Kotoko thought they had won a penalty twice in the first half when their players were bundled in the box, but referee Selorm Yao Bless ruled otherwise.

After the break, Kotoko kept coming, with striker Steven Mukwala wasting a glorious opportunity, but it didn't take long for Kotoko to take a deserved lead.

In the 57th minute, Yussif Mubarik reacted quickly in the box to scramble home to give Kotoko the lead.

Another penalty shout was ignored by the referee before Hearts snatched a late equaliser through Caleb Amankwah.

Hearts are without a win three games into the season while Kotoko have one point after their first game.